Living Art of the Geisha 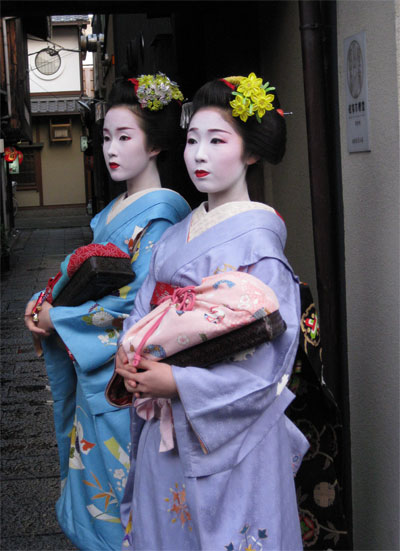 No other aspect of Japanese culture is as widely misunderstood as the geisha. First – and let’s get this out of the way – geisha are not prostitutes. Nor is their virginity sold off to the highest bidder. Nor do they have to sleep with regular patrons. To put it simply, geisha are highly skilled entertainers who are paid to facilitate and liven up social occasions in Japan.

The origins of geisha are subject to some debate, but most historians believe that the institution of the geisha started in the Edo period (1600–1868). At this time, there were various types of prostitutes who served men in the pleasure quarters of the large cities. Some of these ladies became very accomplished in various arts and it is said that some pleasure houses even employed male performers to entertain customers. Some believe that these male entertainers were the first to be dubbed ‘geisha’, which means ‘artistic person’.

Eventually, there arose a class of young ladies who specialised exclusively in entertainment and who did not engage in sexual relations with clients. These were the first true female geisha, and over the years they became prized for the accomplishments in a wide variety of Japanese arts.

Memoirs of a Geisha by Arthur Golden is an entertaining fictional account of the life of a Kyoto geisha.

Without a doubt, Kyoto is the capital of the geisha world. Confusingly, in Kyoto they are not called ‘geisha’; rather, they are called maiko or geiko . A maiko is a girl between the ages of 15 and 20, who is in the process of training to become a fully fledged geiko (the Kyoto word for ‘geisha’). During this five-year period, she lives in an okiya (geisha house) and studies traditional Japanese arts, including dance, singing, tea ceremony and shamisen (a three-stringed instrument). During this time, she will also start to entertain clients, usually in the company of a geiko, who acts like an older sister.

Due to the extensive training she receives, a maiko or geiko is like a living museum of Japanese traditional culture. In addition to her skills, the kimono she wears and the ornaments in her hair and on her obi (kimono sash) represent the highest achievements in Japanese arts. It’s therefore hardly surprising that both Japanese and foreigners consider a meeting with a geisha to be a magical occurrence.

There’s no doubt that catching a glimpse of a geisha is a once-in-a-lifetime Japanese experience. Unfortunately, the sport of ‘geisha-spotting’ has really gotten out of hand in Kyoto’s Gion district (the city’s main geisha district). It’s probably best to keep the following in mind if you join the ranks of geisha-spotters in Gion:
» The geisha you see in Gion are usually on the way to or from an appointment and cannot stop for photos or conversation.
» You shouldn’t touch or grab a geisha, or physically block their progress.
» No one likes being mobbed by photographers or hounded as they walk down the street.
» If you really want to get close to a geisha, private tour agencies and high-end ryokan or hotels can arrange geisha entertainment.
» Finally, if you are intent on getting a few photos of geisha, you will find plenty of ‘tourist geisha’ in the streets of Higashiyama during the daytime. These are tourists who have paid to be made up as geisha. They look pretty much like the real thing and they are usually more than happy to pose for pictures.

While young girls may have been sold into this world in times gone by, these days girls make the choice themselves, often after coming to Kyoto to see one of the city’s famous geisha dances. The proprietor of the okiya will meet the girl and her parents to determine if the girl is serious and if her parents are willing to grant her permission to enter the world of the geisha (the okiya makes a considerable investment in terms of training and kimonos, so they are loathe to take girls who may quit).

Once a maiko completes her training and becomes a geiko, she is able to move out of the okiya and live on her own. At this point she is free to have a boyfriend, but if she gets married she has to leave the world of the geisha. It’s very easy to spot the difference between a maiko and a geiko: geiko wear wigs with minimal ornamentation (usually just a wooden comb in the wig), while maiko wear their own hair in an elaborate hairstyle with many bright hair ornaments called kanzashi . Also, maiko wear elaborate long-sleeve kimonos, while geiko wear simpler kimonos with shorter sleeves.

Maiko and geiko entertain their clients in exclusive restaurants, banquet halls, ‘teahouses’ (more like exclusive traditional bars) and other venues. An evening of maiko/geiko entertainment usually starts with a kaiseki (Japanese haute cuisine) meal. While their customers eat, the maiko/geiko enter the room and introduce themselves in Kyoto dialect. They proceed to pour drinks and make witty banter with the guests. Sometimes they even play drinking games, and we can tell you from experience that it’s hard to beat geisha at their own games! If it’s a large party with a jikata ( shamisen player), the girls may dance after dinner.

The best way to see geisha – a whole lot of geisha – is to attend one of Kyoto’s spring or autumn geisha dances. For more information, Click here .

As you might guess, this sort of entertainment does not come cheap: a dinner with one maiko and one geiko and a jikata might cost about US$900, but it’s definitely worth it for a once-in-a-lifetime experience. Let’s face it: ‘I had dinner with a geisha’ is a pretty good entry in any ‘been-there-done-that’ contest.

Knowledgeable sources estimate that there are perhaps 100 maiko and just over 100 geiko in Kyoto. Geisha can also be found in other parts of the country, most notably Tokyo. However, it is thought that there are less than 1000 geisha or geiko and maiko remaining in all of Japan.

admin
Dear visitor, you went to the site as unregistered user. We encourage you to register or enter the site under your name.
Advertisement
Welcome to Vote