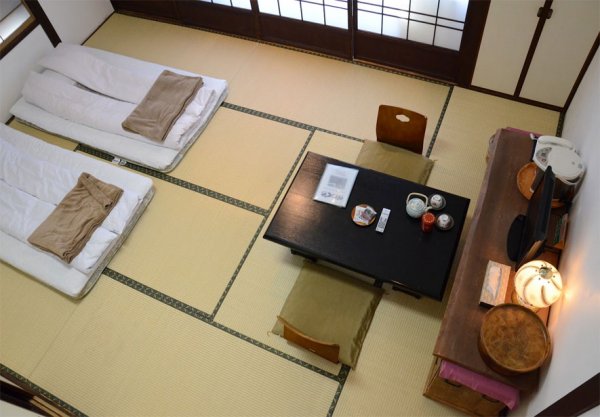 Let’s face it: a hotel is a hotel wherever you go. And while some of Japan’s hotels are very nice indeed, you’re probably searching for something unique to the culture. If this is what you’re after, you’ll be pleased to learn that Japan is one of the last places in Asia where you can find truly authentic traditional accommodation: ryokan, minshuku and shukubō .

Simply put, ryokan are traditional Japanese inns. Ryokan are where Japanese travellers stayed before they had heard the word hoteru (hotel). They are Japanese-style accommodation with tatami-mat rooms and futons instead of beds. Most serve Japanese-style breakfast and dinner, as well. However, this simple explanation doesn’t do justice to ryokan.

A high-end ryokan is the last word in relaxation. The buildings themselves set the tone: they employ traditional Japanese architecture in which the whole structure is organic, made entirely of natural materials such as wood, earth, paper, grass, bamboo and stone. Indeed, a good ryokan is an extension of the natural world. And nature comes into the ryokan in the form of the Japanese garden, which you can often see from the privacy of your room or even your bathtub.

But more than the building, the service is what sets ryokan apart from even the best hotels. At a good ryokan, you will be assigned a personal maid who sees to your every need. These ladies seem to have a sixth sense: as soon as you finish one course of your dinner, you hear a knock on the door and she brings the next course. Then, when you stroll down the hall to take a bath, she dashes into your room and lays out your futon.

It is said that there are more than 80,000 ryokan in Japan, but that number decreases each year as modern Japanese find hotels to be more convenient.

Many ryokan in Japan pride themselves on serving kaiseki ryōri (Japanese haute cuisine), which rivals that served in the best restaurants. Staying at one of these so-called ryōri ryokan (cuisine ryokan) is like staying at a three-star ‘residential restaurant’, where you sleep in your own private dining room.

Another wonderful variety is the onsen ryokan: a ryokan with its own private hot-spring bath. These places were like luxury spas long before anyone had heard the word ‘spa’. Some of the top places have rooms with private en suite onsen baths, usually built overlooking gardens. When you stay at an onsen ryokan, your day involves a gruelling cycle of bathe-nap-eat-repeat. A night at a good onsen ryokan is the perfect way to get over your jet lag when you arrive in the country or a special treat to round out the journey in Japan.

Of course, it would be irresponsible to suggest that all ryokan fit this description. A lot of places that call themselves ryokan are really just hotels with Japanese-style rooms. Some places may not even serve dinner. That isn’t to say they aren’t comfortable: simple ryokan are often very friendly and relaxing and they may cost less than hotels in some places. But if you can do it, we strongly recommend staying in a high-end ryokan for at least one night of your trip.

Note that ryokan may not have en suite bathtubs or showers, and at some simple places even the toilet facilities are shared. If this is an issue, be sure to enquire when you make a reservation.

Staying in a Ryokan

Due to language difficulties and unfamiliarity, staying in a ryokan is not as straightforward as staying in a Western-style hotel. However, it’s not exactly rocket science, and with a little education, it can be a breeze, even if you don’t speak a word of Japanese. Note that much of what we say here will also apply to staying at a minshuku .

Here’s the basic drill. When you arrive, leave your shoes in the genkan (entry area or foyer) and step up into the reception area. Here, you’ll be asked to sign in. Next, you’ll be shown around the place and then to your room, where you will be served a cup of tea. You’ll find that there is no bedding to be seen in your room – your futon is in the closet and will be laid out later. You can leave your luggage anywhere except the tokonoma (sacred alcove) that will usually contain some flowers or a hanging scroll. If it’s early enough, you can then go out to do some sightseeing.

When you return, you’ll change into your yukata (lightweight Japanese robe) and will be served dinner in your room or in a dining room. After dinner, it’s time for a bath. If it’s a big place, you can generally bathe anytime in the evening until around 11pm. If it’s a small place, you’ll be given a time slot. While you’re in the bath, some mysterious elves will go into your room and lay out your futon so that it’s waiting for you when you return all toasty from the bath.