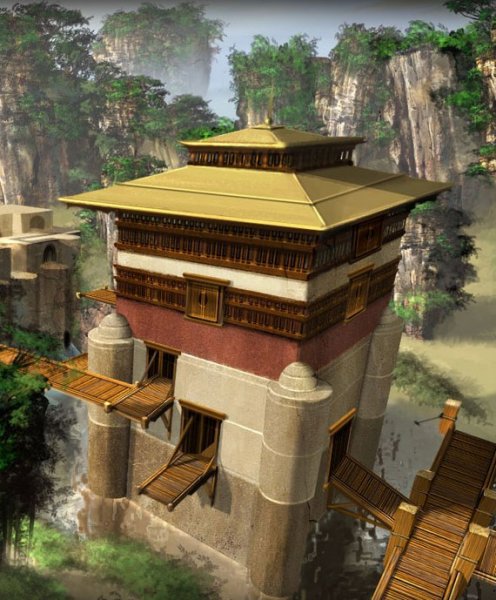 From 794 to 1600, Japanese painting borrowed from Chinese and Western techniques and media, ultimately transforming them into its own aesthetic ends. By the beginning of the Edo period (1600–1868), which was marked by the enthusiastic patronage of a wide range of painting styles, Japanese art had come completely into its own. The Kanō school, initiated more than a century before the beginning of the Edo era, continued to be in demand for its depiction of subjects connected with Confucianism, mythical Chinese creatures or scenes from nature. The Tosa school, which followed the yamato-e style of painting (often used on scrolls during the Heian period, 794–1185), was also kept busy with commissions from the nobility, who were eager to see scenes re-created from classics of Japanese literature.

The Rimpa school (from 1600) not only absorbed the styles of painting that had preceded it, but progressed beyond well-worn conventions to produce a strikingly decorative and delicately shaded form of painting. The works of art produced by a trio of outstanding artists from this school – Tawaraya Sōtatsu, Hon’ami Kōetsu and Ogata Kōrin – rank among the finest of this period.
Calligraphy

Shodō (the way of writing) is one of Japan’s most valued arts, cultivated by nobles, priests and samurai alike, and still studied by Japanese school-children today as shūji . Like the characters of the Japanese script, the art of shodō was imported from China. In the Heian period, a fluid, cursive, distinctly Japanese style of shodō evolved that was called wayō, though the Chinese style remained popular in Japan among Zen priests and the literati for some time.

In both Chinese and Japanese shodō there are three important types. Most common is kaisho ( block-style script). Due to its clarity this style is favoured in the media and in applications where readability is key. Gyōsho ( running hand), is semicursive and often used in informal correspondence. Sōsho (grass hand) is a truly cursive style. Sōsho abbreviates and links the characters together to create a flowing, graceful effect.
Ukiyo-e (Woodblock Prints)

The term ukiyo-e means ‘pictures of the floating world’ and derives from a Buddhist metaphor for the transient world of fleeting pleasures. The subjects chosen by artists for these woodblock prints were characters and scenes from the tawdry, vivacious ‘floating world’ of the entertainment quarters in Edo (latter-day Tokyo), Kyoto and Osaka.

The floating world, centred on pleasure districts, such as Edo’s Yoshiwara, was a topsy-turvy kingdom, an inversion of the usual social hierarchies that were held in place by the power of the Tokugawa shōgunate. Here, money meant more than rank, while actors and artists were the arbiters of style, and prostitutes elevated their art to such a level that their accomplishments matched those of the women of noble families.

The vivid colours, novel composition and flowing lines of ukiyo-e caused great excitement in the West, sparking a vogue that one French art critic dubbed ‘Japonisme’. Ukiyo-e became a key influence on Impressionists (for example, Toulouse-Lautrec, Manet and Degas) and post-Impressionists. Among the Japanese the prints were hardly given more than passing consideration – millions were produced annually in Edo. They were often thrown away or used as wrapping paper for pottery. For many years, the Japanese continued to be perplexed by the keen interest foreigners took in this art form, which they considered of ephemeral value.

Ceramics are Japan’s oldest art form: Jōmon pottery, with its distinctive cordlike decorative patterns, has been dated back some 15,000 years. When the Jōmon people were displaced by the Yayoi people, starting around 400 BC, a more refined style of pottery appeared on the scene. While Jōmon pottery was an indigenous Japanese form, Yayoi pottery had clear Continental influences and techniques. Continental techniques and even artisans continued to dominate Japanese ceramic arts for the next millennia or more: around the 5th century AD Sue Ware pottery was introduced from Korea, and around the 7th century Tang Chinese pottery became influential.

In the medieval period Japan’s great ceramic centre was Seto in Central Honshū. Here, starting in the 12th century, Japanese potters took Chinese forms and adapted them to Japanese tastes and needs to produce a truly distinctive pottery style known as Seto Ware. One Japanese term for pottery and porcelain, setomono (literally ‘things from Seto’), clearly derives from this still-thriving ceramics centre.

Today, there are more than 100 pottery centres in Japan, with scores of artisans producing everything from exclusive tea utensils to souvenir folklore creatures. Department stores regularly organise exhibitions of ceramics and offer the chance to see some of this fine work up close.
Shikki (Lacquerware)

The Japanese have been using lacquer to protect and enhance the beauty of wood since the Jōmon period (13,000–400 BC). In the Meiji era (1868–1912), lacquerware became very popular abroad and it remains one of Japan’s best-known products. Known in Japan as shikki or nurimono, lacquerware is made using the sap from the lacquer tree (urushi), a close relative of poison oak. Raw lacquer is actually toxic and causes severe skin irritation in those who have not developed immunity. Once hardened, however, it becomes inert and extraordinarily durable.

The most common colour of lacquer is amber or brown, but additives have been used to produce black, violet, blue, yellow and even white lacquer. In the better pieces, multiple layers of lacquer are painstakingly applied and left to dry, and finally polished to a luxurious shine.
Contemporary Visual Art

Today’s emerging artists and movements have no such ambivalence. Gone is the anxiety about coopting, or being coopted by, Western philosophies and aesthetics; in its place is the insouciant celebration of the smooth, cool surface of the future articulated by fantastic colours and shapes. This exuberant, devil-may-care aesthetic is most notably represented by Takashi Murakami, whose work derives much of its energy from otaku, the geek culture which worships characters that figure prominently in manga, Japan’s ubiquitous comic books (a good introduction to the art of manga is the Kyoto International Manga Museum; Click here ). Murakami’s spirited, prankish images and installations have become emblematic of the Japanese aesthetic known as poku (a concept that combines pop art with an otaku sensibility), and his Super Flat Manifesto, which declares that ‘the world of the future might be like Japan is today – super flat’, can be seen as a primer for contemporary Japanese pop aesthetics.

Beyond the pop scene, artists continue to create works whose textures and topics relay a world that is broader than the frames of a comic book. Three notable artists to look for are Yoshie Sakai, whose ethereal oil paintings, replete with pastel skies and deep waters, leave the viewer unsure whether they are floating or sinking; Noriko Ambe, whose sculptural works with paper can resemble sand dunes shifting in the Sahara, or your high-school biology textbook; and the indomitable Hisashi Tenmyouya, whose work chronicles the themes of contemporary Japanese life, echoing the flat surfaces and deep impressions of wood-block prints while singing a song of the street.