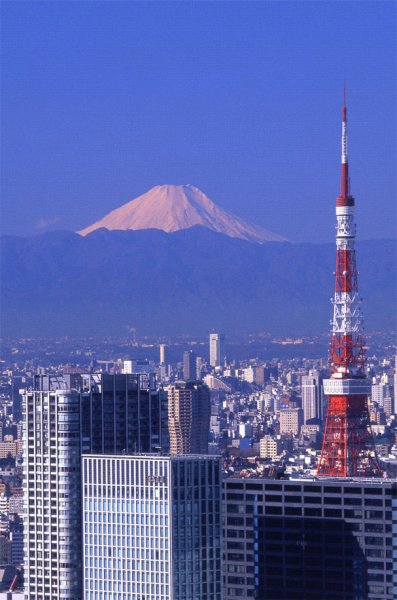 Chaotic yet organised, hyper-modern yet utterly classic, garish yet demure, unique yet unquestionably Japanese, Tokyo ( 東京 ) is a paradox that – like a pop star – seems smug in its greatness yet obsessed with reinvention.

It’s a city bent on collecting superlatives, and since the early days of Edo, Tokyo has done everything in its power to stay ahead of the pack, from reclaiming miles of swampland to transforming war-torn moonscapes into shimmering skyscraper districts.

Today that constant hunger for improvement and change has created a tapestry of sensorial madness unlike anywhere else in the world. In sheer size and scope alone, Tokyo far outweighs other major global centres.

And although Tokyo already seems like some sort of future city, it will undoubtedly continue to push forward, further securing its reputation as the most beautiful ugly city in the world.

Tokyo’s humble beginnings could not have foreshadowed its bright future as one of the world’s great cities. Originally called Edo (literally ‘Gate of the River’) due to its location at the mouth of the Sumida-gawa, this small farming village rose from obscurity in 1603 when Tokugawa Ieyasu established his shōgunate (military government) among Edo’s swampy lands. As the Tokugawa clan grew to govern the whole of Japan, Edo quickly transformed into a bustling city and de facto capital.

In fact, by the late 18th century, Edo had become the most populous city in the world, and was ages ahead of its contemporaries, having already mastered civic waste removal, recycling and eco-sensitive land reclamation. When the authority of the emperor was reinstated in 1868, the capital was officially moved from Kyoto to Edo, which was then renamed Tokyo, meaning Eastern Capital.

After more than 250 years of self- prescribed isolation, Tokyo suddenly welcomed foreign influence with open arms during the Meiji Restoration. Western fashion and ideas were swiftly incorporated into the fabric of society as the city eagerly sought to take its place among the pantheon of the world’s great cities.

Nothing could hold Tokyo back – not even the Great Kantō Earthquake and ensuing fires, which levelled the city in 1923. It was once again torn to shreds during the devastating Ally air raids during the final years of WWII.

Emerging from the rubble after the US occupation, Tokyo quickly propelled itself towards modernity when it won the bid to host the 1964 Olympic Games. All eyes were on the city as it proudly showed lookers-on that it was indeed ready for its time in the spotlight. A soaring economic crescendo followed, culminating in the giddy heights of the 1980s Bubble Economy. After the ‘burst’ in the ’90s, the city has failed to hold its ground amid recession, but it undeniably remains the beating heart of its island nation, never ceasing to reinvent itself while holding significant global influence over fashion, design and technology.

The first thing you should know about touring Tokyo is that there’s no such thing as a complete list of attractions. Endless in size and scope, Japan’s illustrious capital has countless must-sees to fill your itinerary. Perhaps more fascinating than expertly curated museums and eye-catching architecture, however, are Tokyo’s forgotten backstreets. The city’s no-named roads are begging to reveal their secrets, and a wrong turn down an unknown alley could end up being the most interesting and rewarding experience you have during your visit. Unknown noodle shops, hidden gardens and obscurely themed museums await your perusal, and the best part is that everything’s always in flux, rewarding repeat visitors just as much as Nihon novices. Nothing should discourage you from hopping on the subway and alighting at a random station to explore; just make sure to carry your hotel’s meishi (business card) in case you can’t find your way back.

But Tokyo isn’t just a wild cityscape – it’s also very much about the people who fill it. Every day is like a subculture safari – you’ll spot packs of suit-clad businessmen toting their briefcases around town, otaku (geeks) furiously thumbing manga digests, hime gal (think Marie Antoinette after a Hollywood makeover) holding court – pooch in hand – in the trendier neighbourhoods, and goth loli (think Marie Antoinette after the guillotine) angstfully loitering in parks or at subway stops. At the end of the day, all stripes and colours unite for the train ride back to the suburbs, dozing in unison and perking up suddenly just as they reach their station.